Hi! I’m glad you made it here. Let me tell you how I got here too.

The first time I visited Prishtina last February, it took me nine hours from Barcelona, stopping over three hours in Istanbul. There are no direct flights from my city because Spain doesn’t recognize Kosovo as an independent nation, as many others don’t. If it’s hard to get in, it’s even harder to get out: locals need a visa to travel overseas. Even worse, Spain doesn’t allow them to enter.

That fact stayed with me: people from other countries would travel to Prishtina to visit Manifesta. People from Kosovo would not be able to visit their countries back, not for now at least.

Catherine and Tatiana gave me total freedom to propose a new project for Manifesta 14 without any specific location or other constraints. I spent four days walking the city, visiting venues, getting to know the recent history of the country, reading and listening to Manifesta’s documents: the claim for public space, the desires and aims of citizens and the municipality, most of them longing to “break the long isolation of the country”. I was inspired by the young. Many ideas appeared, reacting to all the inputs. “Open the doors of the country,” Dren joked to me.

I felt the need to look at private spaces, visit houses and apartments and meet their inhabitants. I was impressed to know that private homes hosted Albanian institutions before the war.

I started thinking about how to make visitors and locals meet and make houses be opened on both sides of the border.

I felt the hospitality and friendship of the people I met. “You have a friend here,” some guys told me out of the blue. “We are welcoming because we are poor,” said Tristan.

“Meeting people of interest” was written in my schedule. We had no time to prepare for my trip before my arrival, as everything happened so fast, so Lendita kept some gaps in the plan with this sentence, just in case. And it became my main interest: meeting people.

I asked some people to visit them at their houses. I was at Lendita’s family’s place, and her sister spoke to me in Spanish. She learned it from Mexican telenovelas. I was at Driton’s place. I asked him about his graffiti. He expected a radical project to happen in the city. I saw the city through their windows.

Once back in Barcelona, Anna and I were working on Put oneself in the place of the other. It’s a book that brings together a group of actions that I’ve been doing since 2014: abandon your daily routine so that someone else can occupy it; swap house keys for one night; empty out your pockets and reveal objectual intimacies; arrange to meet strangers across the Atlantic; get someone to open up their house to you; receive someone you had forgotten to expect (1). While writing about them, I remembered I had the idea of swapping copies of house keys with people we had just met during one of these actions.

I thought of the key as an object that makes you remember the encounter and, simultaneously, allows you to use it, to access the other’s place.

At that time, I was wearing the house keys of friends because I needed them. I felt safe. Nuria said, “I felt I had friends because I had their keys with me.” I thought then the keys swapping would have a perfect place to happen: Prishtina.

This is how I ended up telling Catherine and Tatiana about my idea. “It makes sense in the context of your work, in the context of Prishtina, in the context of these times,” said Catherine. It was a continuation of my last proposal, Visit a visitor, included in the book. It was a reaction to the geopolitical context. The border is still closed, but our house doors are open to each other, even if you don’t know me, even if I don’t know you. It was also a correspondence with the well-known Kosovar hospitality. And it may create new stories, unexpected ones.

I was happy to find the coincidence between the end of Catherine’s text (2) and the keys proposal. In Hannah Arendt’s words, Catherine’s concept was a challenge to “train our imagination to go visiting”. When I found it, I wrote to her, “I like to imagine that we will visit one another, literally”. “It’s good that you’ll be taking visiting into a new dimension!” she answered.

We all agreed and went for it. We also decided to translate the book into English and bring it here for you to read (3). “I don’t know exactly how to do it. I’ll need to travel again and meet the people I met.”

I travelled again to Prishtina in May. With Lendita, we found the locksmiths: Jener, Ergyn and Namik are ready to copy your keys.

Alba suggested I write to you in the first person to tell the beginning of this story. So I did.

We wait for you at the locksmith.

(1) The works brought together for Put oneself in the place of the other share the intention of forcing one out of one’s own place and into the place of the other, negotiating the conditions for this operation […] The peculiarity of these actions is that they do not culminate beyond the interpersonal relationships they establish. They stay with them, addressing them while maintaining the spatial dimension […] Having primarily focused on urban, institutional, and architectural spaces, what Luz brings into play here is domestic, intimate space, the space of psychology and the body”. Excerpt of the text by Anna Manubens at Put oneself in the place of the other (2022).

(2) Presentation of the Artistic Programme of the Manifesta 14, It matters what worlds world worlds: how to tell stories otherwise, by Catherine Nichols: https://manifesta14.org/programme/artistic-programme/

(3) You can find the book Put oneself in the place of the other at the Institute of Narrative Practices (Hivzi Sylejmani Library) and Grand Hotel info point.

(4) Besa is usually translated as “faith” or “oath” and means “to keep the promise”. Besa is a popular name among Kosovars and Albanians.

Find the people involved in the project on the credits page. 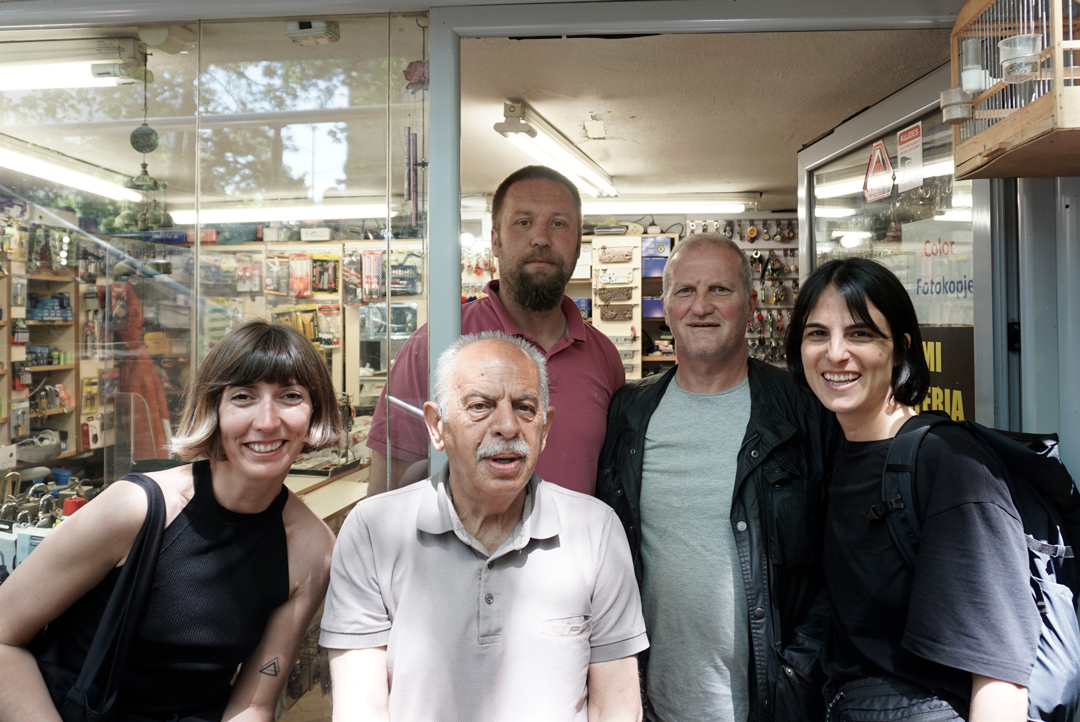 The key swap will take place
in person at the locksmith,
and the copy of the key will be free: